Professor Elbrus Alizade took part at the International Conference “Sustainable development of the environment of the New Silk Road trade zone” which was held on June 15-16 in Chinese National Academy.

More than 60 representatives of the countries located in the zone of the Great Silk Road as Pakistan, India, Nepal, Afghanistan, Iraq, Egypt, Kazakhstan, Tajikistan, Kyrgyzstan, and Germany were present during this important Conference.

During the plenary session of the conference Ramiz Mammadov and Elbrus Alizade made reports respectively on the themes “The climate change in the Caspian Sea and the effects of anthropogenic factors on Caspian Sea ecosystems” and “Sustainable development of natural-economics Geosystems of mountains”.

In result of discussions it was decided to create the International Scientific Union-Alliance, consisting of countries, including Azerbaijan, located on the Great Silk Road, which would help to investigate all problems related to natural events and processes that can be expected, economic and geographic changes, the action mechanism of the road.

Were widely discussed many problems of the use of economic, environmental and natural resources of Silk Road’s economic area, whose projects have already been restored or are currently being carried out.

About 100 reports have been heard. The southern, central, northern directions of the Great Silk road, human resources and infrastructure problems have been widely discussed. 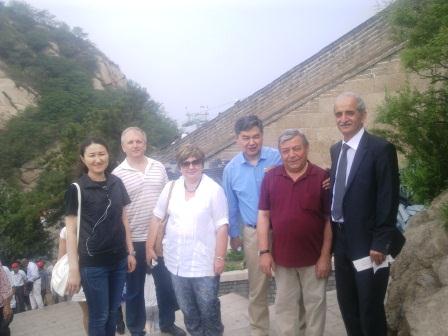