Azerbaijan – border of Europe and Asia

The National Academy of Sciences of Azerbaijan together with the Geographical Society of Azerbaijan after long discussions determined the points through which must pass the border between Europe and Asia on the territory of Azerbaijan.

As it is known that the border between continents was determined in 1964, but up to now this question remains disputable. That’s why the scientists both from Russian and from Kazakhstan are suggesting new variants of its carrying out. By joint actions they carried out the line up to the Mangistau Peninsula in the Republic of Kazakhstan, which is situated in the eastern coasts of the Caspian Sea.

It is logical to suppose that further the border line must pass through the Absheron Peninsula, watershed of the Main Caucasian range up to the Black Sea.

For the first time who introduce the suggestion and prepared the correspounding materials on carrying out the border through the territory of Azerbaijan was Cand. G.-M. Sci. Rashid Fataliyev.

The Institute of Geography and the Geographical Society of Azerbaijan, in its turn, determined the points through which may be laid the border in our republic and on August 7, 2013 under the leadership of acting director of the Istitute of Geography, Cor. Member of ANAS, Prof. R.M. Mammadov a group of collaborators of the institute placed distinguished marks near to the village Fatmai of the Absheron district and settlement Altyaghaj of the Khyzydistrtict.

So, the Institute of Geography of the ANAS and the Geographical Society of Azerbaijan did their bit in discussion on the given question. 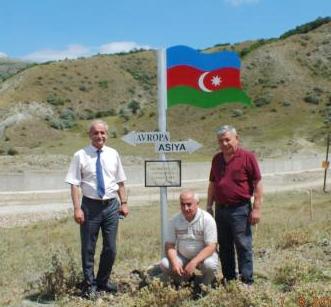 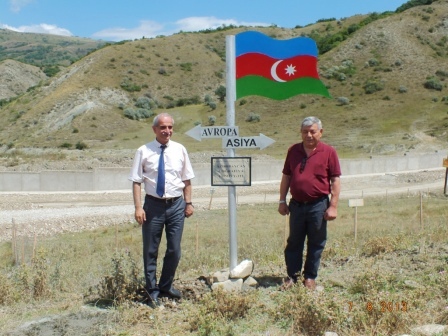