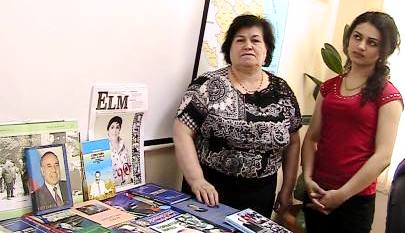 Coordination board of Caspian sea's problems

The Council organizes the discussion of the works to be intended to carry out in this direction at the scientific-research and institutes of higher education functioning in the republic and recommends to work out actual and perspective subjects.

The Council has 15 members and its Chairman is Cor. Member of the ANAS, prof. R.M.Mammadov, and scientific secretary – Doc. Ph. on Phys.-Math. Sciences N.I.Ahmadov.

Composition of the Coordination Council on the “Caspian Sea” problems.

Ramiz Mammadov (chairman) – acting director of the IG, Cor. Memb. of the ANAS

Mammad Salmanov – director of the Institute of Microbiology, academician

Rafig Gasimov – Lead of laboratory at the Institute of Physiology, Cor. Memb.

Farda Imanov – Lead of department at the BSU, Doc. of Geography

Rza Mahmudov – director of the SRI of National Hydrology, MENR

Mursal Aliyev – chief of the Department of Ecology, Baku city

Ecochemical peculiarities of the oil polluted landscapes in the Absheron peninsula and the ways of their improvement. Science Foundation of  SOCAR, 2012-2014, Alizade E.K.

Estimation of landslide danger and risk for life activity of the population of Muganli village and adjoining territories to it. Fund on Development of Science at the President of the AR, 2012, Ismayilov M.D.

Interdisciplinary analysis of ecosystem of the Caspian Sea (MACE). Program of NATO “Science for the name of place”, 2005-2008, Mammadov R.M.

Elaboration of observation system for the basin of the Caspian Sea with the aim of basis forming for ecological forecasting. Program of NATO CCMS, 2003-2004, Mammadov R.M.

Modeling of emergency destructions of oil and gascondensat fields in the areas of ACG and Shakh-deniz. BP, 2003, Mammadov R.M.

Forecasting the spreading of overflow of oil in different hydrometeorological conditions at the Nakhichivan field in the Caspian Sea. EXON, 2002, Mammadov R.M.

First report on the climatic changes in the territory of the Azerbaijan Republic. GEF/UNDP, UNFCCC, BONN, 2002, Mammadov R.M.

Investigation the influence of level rise of the Caspian Sea in the desertification process at the coastal zone. XEP, TACIS, 2001, Mammadov R.M.

Monitoring of flows in the coastal zone of the Caspian Sea. BP, Amoco, 1998, Mammadov R.M.

Staff were sent to Almaty

The acting director of the Istitute of Geography Ramiz Mammadov, deputy director on science Elbrus Alizade and leading scientific-worker of the Department of Landscape Science and Landscape Planning Irina Kuchinskaya are invited to take part in the work of joint meeting of United Scientific Council on the Problems of Geography functioning at the International Association of Academics of Sciences and United Scientific Council on Fundamental Problems of Geography functioning at the Russian Academy of Sciences being held in Almati, Kazakhstan on September 9-13, 2013.

Joint report of R.Mammadov and E.Alizade titled “Geographical bases of revealing and warning of natural-destructive phenomena of Alp-Himalaya type mountain geosystems” is included the program of the Conference. I.Kuchinskaya will make a report titled as “Dynamics of change of the landscape-ecological conditions in the Major Caucasus”.